Toke Makinwa on the set of her new TV show, ‘Trending’ – PHOTOS 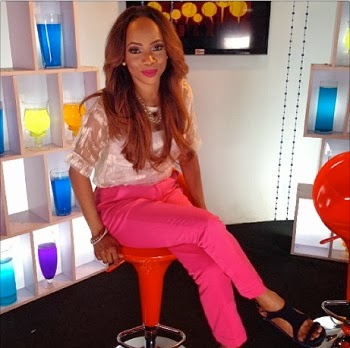 Toke is living her dreams and one of them is
having her own TV show before 30.Apparently,
its a dream come through as she is currently on
set shooting her show”Trending” She said “ “on
the set of my new TV show!!!! Coming soon X”.
Its basically a show where celebrities would
clear the air on controversial issues about
them.. She had rapper, Reminisce on the show..
Love the set decor, looks very colorful ..Good
luck to her 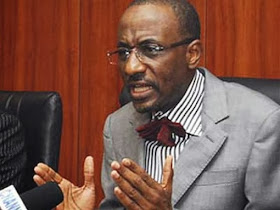 The stage is set for a showdown between the
Governor, Central Bank of Nigeria, Mallam
Lamido Sanusi and the Presidency over when he
will step down from office. Sanusi is insisting he
would remain in office till June 2, 2014, when
his tenure official expires.
Sanusi’s insistence on staying in office till June
this year followed the storm provoked by
President Goodluck Jonathan's order to him to
resign over allegedly leaking a letter Sanusi
wrote to him (President) claiming that a huge
sum of about $49.8bn oil revenue was missing.
As the battled begins, Sanusi’s position has
received support from lawyers who said
President Jonathan lacks the constitutional
powers to direct the Governor of the Central
Bank to resign from office.
Most lawyers, who spoke to Vanguard,
maintained that only a two-third majority of the
Senate can validly sack the CBN governor from
office.
On their part, Economic operators called on
Jonathan to follow due process, in his attempt to
remove Sanusi from office. They said while the
President might have the means to fire Sanusi,
he should do so according to the terms and
conditions of the office.
CBN sources confirmed to Vanguard that Sanusi
has made up his mind to resist any attempt to
force him out of office before June 2 when his
tenure expires.
This position was further confirmed by CBN’s
spokesman, Ugo Okoroafor. He said Sanusi told
members of the management at a meeting on
Wednesday that he would be in office till June
and did not even indicate that he might proceed
on any terminal leave before completing his
tenure.
Okoroafor’s words: “He told us at the meeting
we held (on Wednesday) that he will be leaving
in June and did not give any indication that he
would proceed on retirement leave before that
time.”
Sanusi is relying on CBN Act 2007 which defines
the tenure, appointment and removal of CBN
governor.
Sanusi: Presidency keeps mum
The Presidency has kept mum over reports that
the president had asked the governor of the
Central Bank of Nigeria Sanusi Lamido Sanusi to
resign. Though the Special Adviser to President
on Media and Publicity, Dr Reuben Abati had
promised to react to the story before the end of
the day, several attempts to reach him, last night
failed.
Lawyers back Sanusi
Sanusi’s resistance has received the backing of
senior legal practitioners. A cross section of legal
practitioners that spoke to Vanguard,
maintained that only a two-third majority of the
Senate can validly sack the CBN governor from
office. They said that the President has no such
powers under the law to Sack Sanusi, adding
that President Jonathan would be acting beyond
his constitutionally guaranteed powers should
he insist on relieving the CBN governor of his
duties without recourse to due process.
Professor Itse Sagay, SAN, said: “The CBN
governor was right in his position. Although, he
was appointed by the president, however, that
appointment was ratified by the National
Assembly. His removal is supposed to be ratified
by the same body.
“Meanwhile, from what we gathered, the
government is making the move to remove the
CBN Governor from office because of the
revelation he made on the non-remittance of oil
revenue to the federation account by some
government agencies.
“The CBN governor is due to retire in four
months time, so what was the urge from the
President to want to remove him from office
now by all means ?”
Posted by Unknown at 11:21 am No comments: