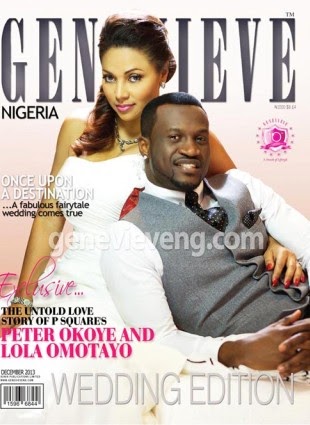 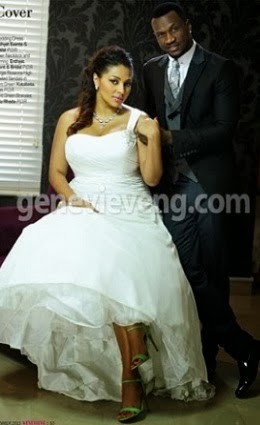 Newly weds Peter and Lola Okoye cover the Wedding Edition of Genevieve magazine December issue. Such a beautiful cover/couple!
Posted by Unknown at 4:20 pm No comments:

P-Square are reportedly planning to have a joint white wedding.
This comes after one of the identical twin brothers, Peter recently had his traditional wedding.
His brother, Paul said they couldn't have their traditional weddings on the same day because of cultural differences.
Paul's fiancé, Anita Isama, is from Kogi and Peter's wife is Yoruba.
Paul said, "So because im dey marry Yoruba woman, wey dem go do am here, if my own na from Kogi, all of us go do am for Lagos? Make una chill. That's why it's a traditional marriage. You do it in a girl's home. When I go do my own, I will do it in her home."
Paul added, "If na for white wedding, I will answer you" prompting speculation that their white wedding will be on the same day.
Posted by Unknown at 4:14 pm No comments:

The National Agency for Food and Drug Administration and Control (NAFDAC) on Thursday said that the agency had sealed 54 table water producing factories in the Niger state.
The NAFDAC Coordinator in Niger, Mr Dadi Mantum, said this at news conference in Minna.
He said that the 54 sachet water factories were closed in Suleja and Minna for allegedly contravening the agency's regulations.
Mantum said that the agency took the action following tip-offs that the factories were operating illegally, adding that the factories were closed as part of efforts to protect public health.
He stressed that NAFDAC would strive to be more proactive, warning that it would sanction any individual or organisation found wanting in compliance with extant regulations on water packaging.
"It is the simple laws that we are going to enforce. These include laws on hygiene, cleanliness, proper storage of water, proper mode of transportation and employment of correct personnel.
"We have decided that these simple laws would be enforced.
"Acquisition of equipment is not enough. In fact, these producers buy equipment which is quite expensive.
"We, however, need to enforce the laws on hygiene so as to guarantee that the sachet water being produced is fit for human consumption," he said.
The NAFDAC coordinator identified lack of personnel as one of the limitations which constrained the agency from getting to the grassroots regularly.
Mantum said that with the assistance of the state government, task forces were being set up to carry out the enforcement of health standards in the rural areas.
"We are constrained when is comes to reaching out to the people in the rural areas as regularly as we do with the people in urban areas.
"That’s why there is still much disparity between monitoring in the urban and rural areas," he said.
Copyright NAN
All rights reserved. This material may not be reproduced, published, broadcast, rewritten or redistributed without prior permission in writing from NAN.

Posted by Unknown at 4:04 pm No comments:

Mr. Willy Obiano, candidate of the All Progressives Grand Alliance, APGA, is the winner of the Anambra State governorship election.
A supplementary election was held in 210 polling units after the commission declared the exercise inconclusive in some wards in the affected council areas.
In the final result as announced Sunday morning, Obiano polled a total of 180, 178 votes while Tony Nwoye of the PDP came second with 97, 700 votes.
Chris Ngige of the APC and Ifeanyi Ubah of the Labour party came third and fourth, respectively, with 95, 963 and 37, 495 votes.
According to the results already released by the INEC, total number of votes cast is 442, 242; total number of valid votes stood at 425, 254 and total number of rejected votes put at 16, 988.
APGA won in 16 council areas- Aguata, Ayamelum, Anambra East, Anambra West, Anaocha, Awka North, Awka South, Ekwusigo, Ihiala, Njikoka, Nnewi South, Ogbaru, Onitsha North, Onitsha South, Orumba North and Orumba South.
The PDP won in Oyi and Dunukofia, APC won in Idemili North and South, while labour party won in Nnewi North.
Meanwhile, party members, observers and journalists are still at the INEC office in Awka expecting the final declaration of the winner by the commission.
Posted by Unknown at 3:54 pm No comments: