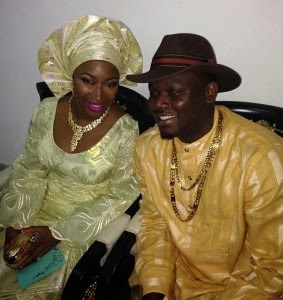 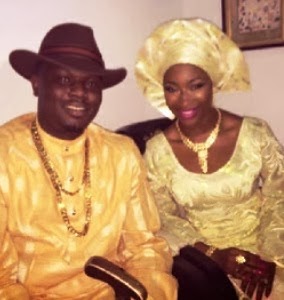 The Mavin star Dr Sid and his family Members went to Their introduction held today at Simi's family home in Ikoyi. More photos after the cut... 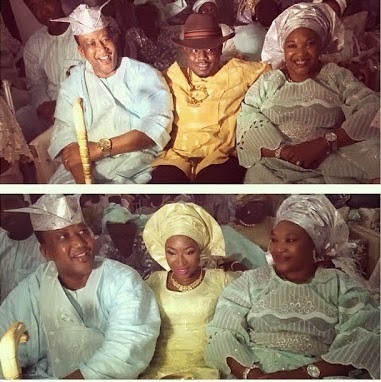 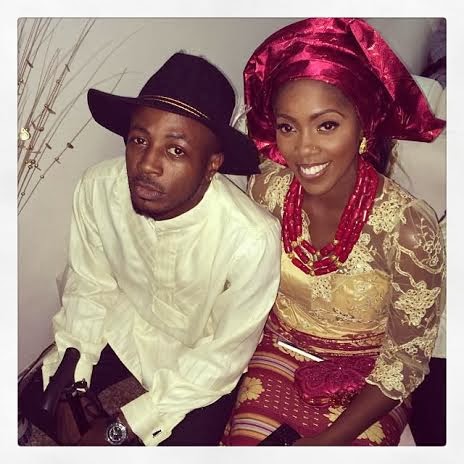 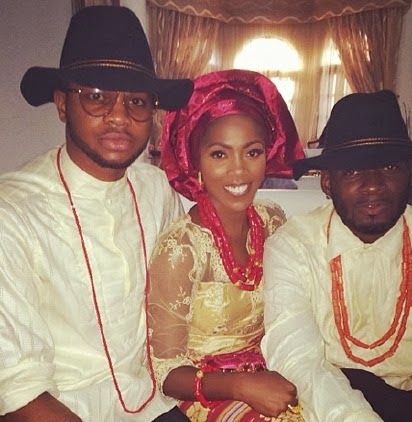 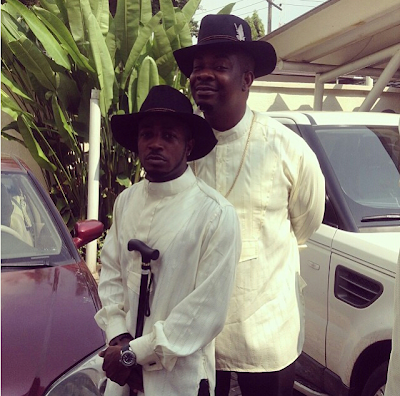 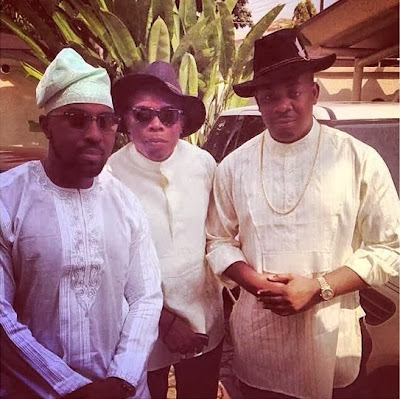 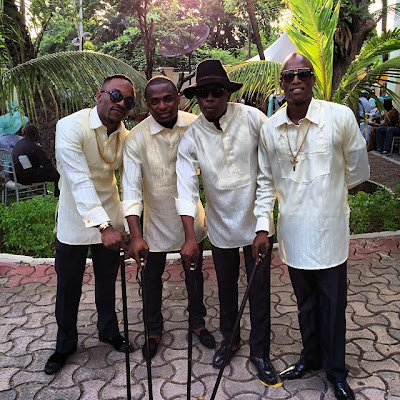 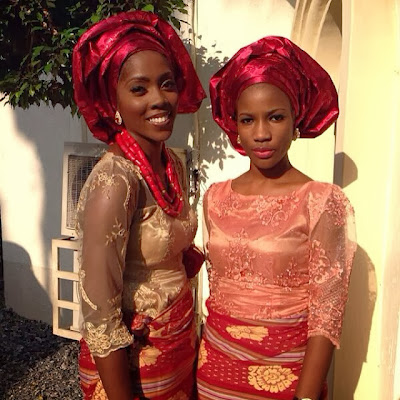 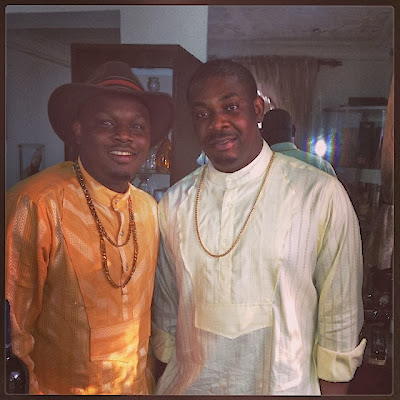 Posted by Unknown at 3:47 pm No comments: According to her she was styled by Veronica of Vane Style
and she was meant to come out that way. Her words
below.

First, I would like to say that a onetime style look does not
define my total dress sense. I hardly wear dresses or skirts.
The influence of growing up as an only girl with my three
brothers is usually seen in my tomboyish fashion style, as
I am mostly a jeans and top lady. The dress in question
was for my performance at the recent launch of the new
popular TV network, EbonyLife TV.
It was a rare moment to catch Nikki, I must say, as I was
styled in an Iconic Invanity piece off the 2013 Italian
Fashion Week Runway by Veronica of Vane Style, the
official stylist to Genevieve Nnaji, Omotola Jalade-
Ekehinde and more.
It definitely caught everyone’s attention and even FAB
magazine called it one of the best looks of the night. For
me, it was a whole new adventure, one which I enjoyed
and relished greatly and it totally has nothing to do with
my music or message

Posted by Unknown at 1:03 pm No comments:

Ada Of The East Contest

Miss Victoria Felix Amaka is a very Beautiful and talented yung lady..she need you to vote for her to win the contest...pls if you love me and you love my work..Pls vote 4 victoria......
See link below...
http://www.prezplay.net/ada-of-the-
east-contest-vote-the-winner/

A newly wedded bride escaped death by the whiskers in
an auto crash on her way from her wedding.
The accident was said to have occurred at about 4.45 pm
on Saturday, involving an NNPC tanker, a cargo truck
and two saloon cars, close to the Otedola bridge, Alausa,
on Lagos/Ibadan Expressway.
A reporter who witness the accident said the NNPC
truck, could not hold its break as it was descending the
slope at top speed. The truck rammed into the first car,
squashing the second one against the cargo truck.

Posted by Unknown at 8:54 am No comments: The autumn internationals have just finished, but rugby
fans will be eagerly anticipating the first day of 2014
when they can place this calendar on their walls.
Oxford University women’s rugby team are copying their
male counterparts by posing for their own naked
calendar – with only strategically positioned hands to
maintain their modesty.
The female team stripped down to just their rugby boots
and socks for the black and white photographs taken
around the city to raise cash for charity.

Captain Tatiana Cutts, 25, tackling teammate Danielle
Yardy, 23, by the river
The calendar is being sold for £10 to raise money for
Mind Your Head, Oxford’s mental health awareness
campaign.
Tatiana Cutts, 25, who tackles team-mate Danielle
Yardy, 23, by the river in the September photograph,
said it was ‘mostly hilarious, really very cold, and
absolutely worth it for such a good cause’.
The law PhD student at Keble College, who lectures
undergraduates part time and is the club captain, said:
‘It was a bit nerve-racking at first but after a minute it
was good fun and great for team bonding.

Good sports: The girls described the day as ‘mostly
hilarious, really very cold, and absolutely worth it for
such a good cause’
‘We were lucky it was a sunny day, but I was still
absolutely freezing in the picture. We ended up in the
river twice, it was utterly miserable.’
Miss Cutts, who is from Tavistock, Devon, and went to
Devonport High School for Girls, dismissed the idea that
the calendar is distasteful. ‘What we’re doing is
celebrating strong women,’ she said. ‘These girls are
athletics, these are their body shapes, and they should
be celebrated.’
The women’s rugby team, who have the motto ‘Back
Yourself’, decided to pose for their own calendar after
previously helping to sell the men’s calendar.

Club president Elizabeth Dubois, from Dartmouth,
Canada, who is studying for a PhD in Information,
Communication and the Social Sciences at Balliol, said:
‘We saw the success of the men’s calendar last year and
while were helping to sell them at matches people said
“if it was your team in the pictures, we would buy one”.
‘Playing rugby is certainly an opportunity to build skill
and physical strength, but it is also a chance to release
stress, form a social support structure, and feel
welcomed.
‘With this calendar the club hopes to highlight the
inclusiveness of women’s rugby.
‘When you play women’s rugby people have a
stereotypical image of you and we wanted to confront
that. We have girls of all shapes and sizes, and studying
all types of academic subject.’
The calendar features current members of Oxford
University Women’s Rugby Football Club on the pitch,
in the gym, in the library, and around Oxford. Posted by Unknown at 8:43 am No comments:

There is one fleeting moment in ‘Grace and glory’, Solid
Star’s unnecessarily long second album which a good
number of music heads had hoped will be a thrilling
session. It occurs in ‘Halle’, a vocoder assisted mid tempo
run through of his struggles as an up and comer. Solid
Star’s tentative vocal breeze is perfectly suited to the light
drums applied here as he drawls lazily: ‘Everybody wan
know me now/ record labels wan sign me now.”
Good for him but bad for us as the disc begins to go south
after this okayish intro. Masterkraft shows up for the
instantly forgettable ‘Worry me’, another (sub) standard
variation of every inane pop song released this year. And so
continues the unfortunate decline.
There was a glimmer of hope on the track, ‘Oluchi’, the
JSleek produced duet with highlife prince, Flavour. Both
acts found common ground and soldiered the song to it’s
throbbing, hard-to-dislike babble chanting ending but this
song probably would not stand out on a better album.
Other mild highs are the established hits, ‘Omotena’ and
dance floor favourite ‘Skibo’.
He tries to pack the album with danceable pop numbers
but this approach fails miserably as song after song builds
to a disappointing record. Which is why it is not surprising
to see the Eva assisted dance hall slowburner ‘I’m sorry’
creep in unannounced with a steamy verse from the
femcee. It would be totally unremarkable though absent
Eva’s sexy presence. Ditto ‘Perfect girl’ without the Jesse
Jagz and Vector assistance.
There are no greater aspirations to ‘Grace and glory’- apart
from boring the listening public with another dead on
arrival album. Making a reductive, repetitive album and
applying a style that has been done to death by the current
litter of pop stars hardly stands anyone apart. Anyone with
access to in demand producers, guest appearances and a
vague knowledge of today’s music scene will make exactly
the same record Solid Star has presented.

Posted by Unknown at 8:22 am No comments: